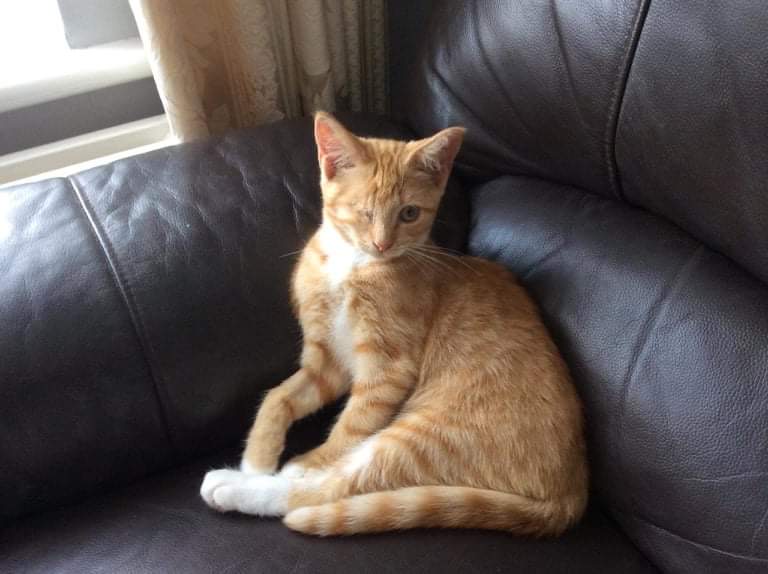 It was a hot summer’s day in Mersea when a little ginger kitten, Shrimp, now named Theo, was brought to our front door. He had been the subject of conversation on the island for a few days as people could see his eye needed veterinary attention, but no one could get close to him. Luckily the persistence of the locals paid off and he could finally get the help he needed.

On assessment the eye injury was not looking good – it was enlarged and painful, so the prognosis did not look good. Ola applied creams and ointments in an effort to save his eye and he stayed with her at her home (much to her own cat’s dismay). Unfortunately after a few days of treatment it was clear that the eye was not improving. The only option was to remove the eye to stop his discomfort.

This was not a decision that was taken lightly. Being only 8 weeks old and weighing in at 1kg, surgical risks were high and there was a chance that he wouldn’t make it. On top of this, during all eye removal surgeries there is always a risk of blinding the other eye in the process. The team prepared him as best we could, to keep him warm and comfortable throughout and give him the best chance possible.

We were delighted that the surgery was a success! However, Shrimp was not out of the woods yet…. With all surgeries, the recovery period brings continued risks. Again he stayed with Ola, taking regular pain relief and wearing a buster collar at all times. This is because if he was to scratch the eye and break the stitches the wound would reopen with a risk of infection. Shrimp was not most impressed but after a lecture from Ola (and lots of dreamies), understood why it was so important and obliged.

The next hurdle for Shrimp was finding a new home and family who could give him all the love he deserves. Thank you all for the overwhelming number of offers to give Shrimp a loving home, he would have been lucky to have shared your homes but ultimately we had to make a decision based on which home would suit him best.

We are happy to say that Shrimp, now named Theo, is thriving in his new home, and is growing in strength and confidence each day. Someone else who is thriving in their home is Ola’s elderly cat Donkey, who is pleased to see the back of the energetic ginger kitten who kept chasing his tail!